To Turn a Blind Eye, To Bleed: An Artwork and a Creative Essay

This is an art piece I did in 2014 titled "Bloei" or bleed in English. The Afrikaans word "bloei" has two meanings: to bleed and to blossom. The following is a creative and critical essay I wrote about how society is very dangerous for our inner creative voice. Please comment your feelings on this subject. 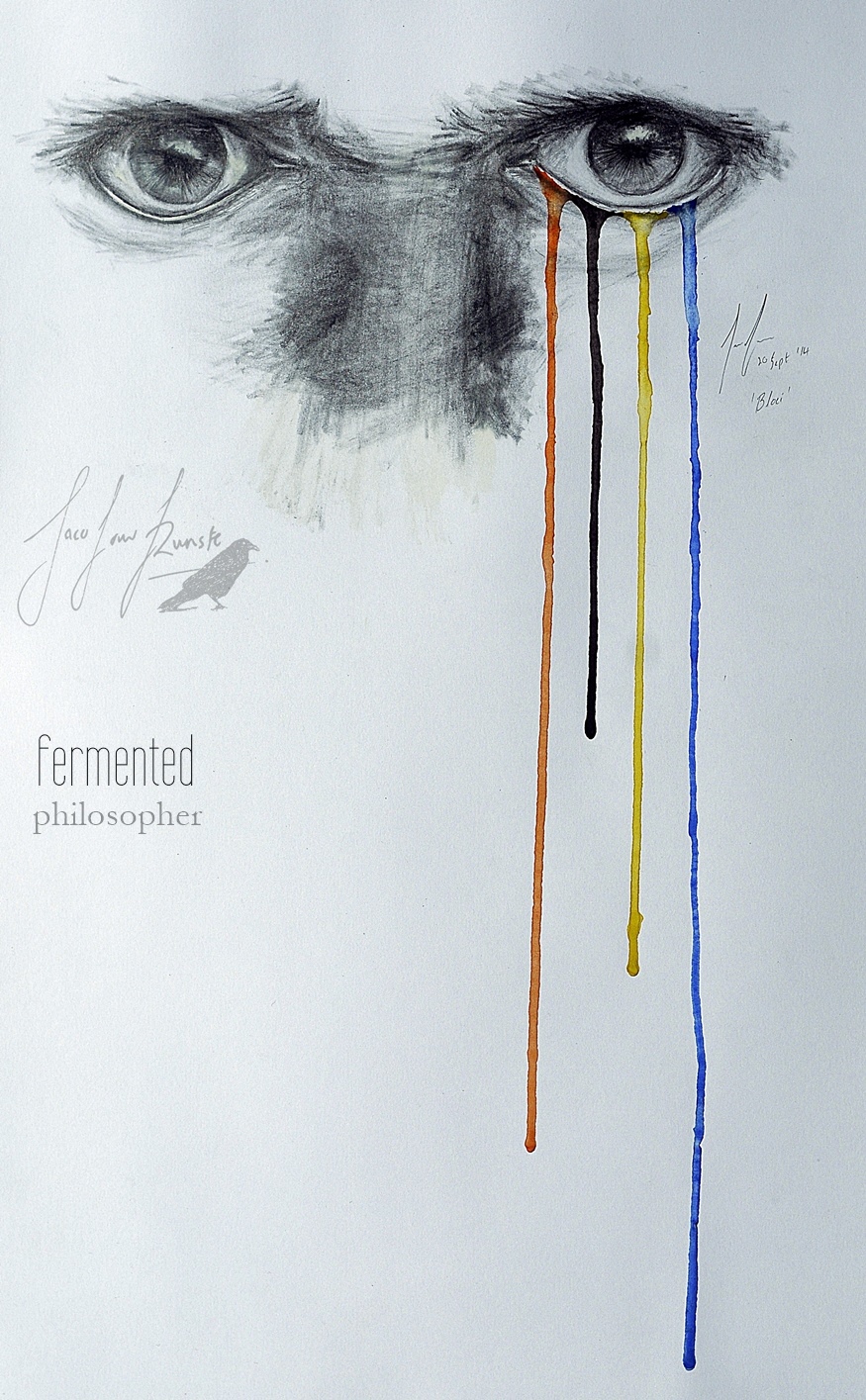 To turn a blind eye, the idiom began from a man in the army who really had only one eye. The details remain fuzzy. This in a way places the above work in context.

Today we are bombarded from all sides with so many different things, the only constant today is change. The church, your parents, school, social institutions, friends and then that voice within us. The first point I want to make with this essay is about the voice within us. That voice is the only thing that's real, nobody can take it away from you, but people can influence it and stop it in the end. For the purpose of the essay, I will call it inauthentic to lose the inside voice, borrowing the term from JP Sartre.

Everything in life affects us in a way, either directly or indirectly. Usually it’s the small things that affects the voice within us the most. (The word “influence” can be interpreted in different ways. Influencing can be subjective as well as objective. To be influenced, for example, by music or a poem, and this becomes an emotional experience. Emphasizes on being “touched” by the music of poem. The second way of understanding being influenced, is that it changes your entire life and the actions you take. It’s clear that influence can be used in two ways.)

These influences are very important, they shape us into who we are, but they can also be very dangerous. Music, for example, influencing you in such a way that it changes your life, changes your actions as well as your attitudes toward people, is unbelievably inauthentic, because that music could have been written by someone who is inauthentic themselves. (Do not see this as a person who complains about society being influenced by other people. The argument will progress, but in short it is that we need to choose our own way of thinking, and not that of for example a famous musician.) This inauthenticity that is created is like a ripple that goes through water, it just gets bigger and bigger. People are influenced by music famous people. The music and television thus affects our entire society and leads to the voice on the inside being destroyed. Other people think for us. We lost the voice, and this is the problem.

Creativity is important. Without creativity we are “dead”. And this is where the problem mentioned above comes to mind. As soon as the voice is influenced by something inside of your mind, the creative aspect is influenced within you (being creative means not only painting, etc. but thinking out of the box and not following mainstream thinking). Today’s mainstream music and authority figures (mostly famous people) are “fed” like a gluttonous monster by inauthentic people who support it. This leads to the death of creative minds, because it’s easier to feed the lie, than live the truth.

The “minority” is also important. The minority is the people who see further, think creative; the people who do not turn a blind eye and the people who still fight to stay true, and authentic, even if society forces you to become part of the mainstream. This is where my work, “Bleed/Bloei”, applies. (The Afrikaans term “bloei” means to bleed but also to blossom and flourish). The idiom to turn a blind eye is the place where the eye bleeds, but also blossoms. The eye, however, is not flourishing because we turn a blind eye on creativity, and the voice within you. So many people’s (creative) inside voice is “dead” because of our “dead” society. Faith, parents, friends, education and social institutions kills us (and our creativity). We forgot to think for ourselves, we forgot how to think, we forgot how to think. We live inauthentic for authority. Television, social media, famous people, are the biggest causes, they think for us. We do not think anymore because we want to see, we want to follow, we want to be part of the whole. We are scared to stand out. And this is the second cause of losing creativity. We do not think so, we cannot be creative. Nobody is reading books anymore, nobody is critical about the books they should read. We forgot how to think, we forgot how to read, we forgot how to think critically. “I think therefore I am” is outdated. “I think therefore I live (bleed/blossom)” is more appropriate.